PDP fingers APC
…We know nothing about the attack, APC
By Davies Iheamnachor

PORT HARCOURT – A supporter of the People’s Democratic Party, PDP, has been feared killed in Rivers State as gunmen attack chieftains of the party. 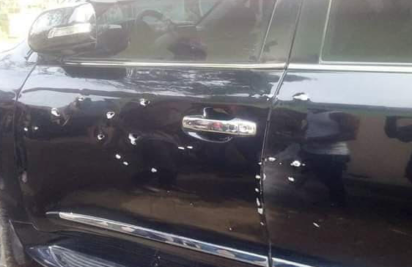 The incident which happened on Wednesday evening at Ipo Community, Ikwerre Local Government Area of the state left many others with bullet wounds.

However, the spokesman of Rivers State Police Command, DSP Nnamdi Omoni, who confirmed the incident said the police are not aware that anyone died in the incident.

Omoni noted that the attack was carried out by yet to be identified gunmen, adding that three persons sustained wounds.

It was learnt that the PDP chieftains had visited Ipo community for a ward-to-ward Permanent Voters’ Card, PVC, sensitisation when the yet to be identified gunmen struck.

It was also learned that to Chairman of the LGA, Mr. Samuel Nwanosike, who narrowly escaped assassination has been taken to a health facility for treatment.

A source privy to the incident, who pleaded anonymity, disclosed that the gunmen numbering over 30 fully armed invaded the event and shot sporadically.

The source also disclosed that killers vandalised many cars, adding that Nwanosike and other chieftains of the party who attended the event only escaped because they drove on a bullet proof vehicle.

The source said: “At the peak of the PDP event at Ipo gunmen entered and opened fire. Our leaders narrowly escaped assassination from the scene.

“The boys number over 30 chased out leaders who were a bullet proof car and they shot many bullet at the car. They escaped because vehicle is bullet proof.”

The Publicity Secretary of PDP in the state, Hon. Darlington Orji, accused the leaders of the All Progressives Congress in the area of the attack.

Orji, who confirmed the development to Vanguard yesterday, stated that the party lost one person in the attack, adding that many others sustained bullet wounds.

He said: “Our party went for ward-to-ward PVC sensitisation in Ipo and we were attacked by APC sponsored thugs.

“Precisely, on the 5th of November at ward two Isiokpo, the Chairman of Ikwerre LGA, Samuel Nwanosike, made it open that there was a meeting going on at Afrique Hotel. All the leaders of APC in the LGA engaged one School Boy, who was declared wanted by the state government to attack us.

“They attacked us around 2.pm. They killed one of our members. We have informed the security agencies of the threats and signal we received and it has happened.”

But, APC in a swift response, denied knowledge of the attack, adding that the attackers are allies of PDP who feel abandoned by the party.

The Publicity Secretary of the party, Chris Finebone said: “We know nothing about what they are saying. We understand their attackers are their former allies who killed and maimed APC members in 2015 and subsequent rerun elections who feel abandoned by the PDP.

“At least, that’s the information we are hearing. If they truly had credible information about complicity of anyone, why didn’t they approach security agents for arrests and investigation?

“Our real worry is that the PDP know that they brought this on themselves. They only want to use it to lay a foundation for a fresh narrative that will kick start fresh round of violence as the 2019 elections approach. You know that they thrive on violence.”

Meantime, the Coordinator of Media Awareness and Justice Initiative, MAJI, Onyekachi Okoro, called youths of the state to avoide been used by politicians yo cause violence before, during and after elections in the state.

Okoro, who spoke in Port Harcourt yesterday at a two strategy meeting of stakeholders in the 23 LGAs of the state on ‘Vote not Fight, VNF, Campaign’, organised in collaboration with National Democratic Institute, NDI, urged youths to seek development.

He advised youths to shun being engaged to disrupt campaigns and hijack electoral material to favour a particular party, adding that youths should work positively to take over elective offices.