A Short Timeline of
The Amazing Dishonesty of the Media:

4/16/2020
Trump unveils fairly boring guidelines to slowly reopen America and re-vitalize economy. Tells no one to stop current measures, specifically tells people to continue to social distance and wear masks (1)
4/17-20/2020
Media reports, mostly through Op-ed nonsense, how reckless Trump was to totally reopen America, despite him not doing that and instead being, boring ‘on-prompter’ Trump.
4/20/2020
Georgia Gov says screw it and reopens his state.(2)
4/22/2020
Trump, logically, criticizes that because it totally goes against his boring plan.
4/23/2020
The media today criticizes Trump for going back on the statements from him that THEY MADE UP.
“Trump Changes Course on Reopening the Economy After Georgia Governor Tries To Follow His Lead” – Reason (3)
“Trump reverses course, says it’s ‘too soon’ for Georgia Gov. Kemp to reopen state” – NBC News (4)
“Georgia feud spotlights Republican divide over reopening economy” – POLITICO (5)
and final example:
“Could you talk about your decision making process on the healthcare of Georgia, you yesterday said… to the Governor of Georgia that you were concerned and earlier this week you spoke and you did not convey this kind of message. Was there a change in your thinking?” (6)
– fake newswoman tried to ask a question based on this false premise and Trump shut her down, a little too politely, but thankfully he did shut her down. They’ll probably start lying about something else tomorrow but I wonder if anyone notices that, um… ALL OF THESE LIES ARE RECORDED AND PUBLISHED ONLINE! And this is why more and more people are turning away from Mainstream news. 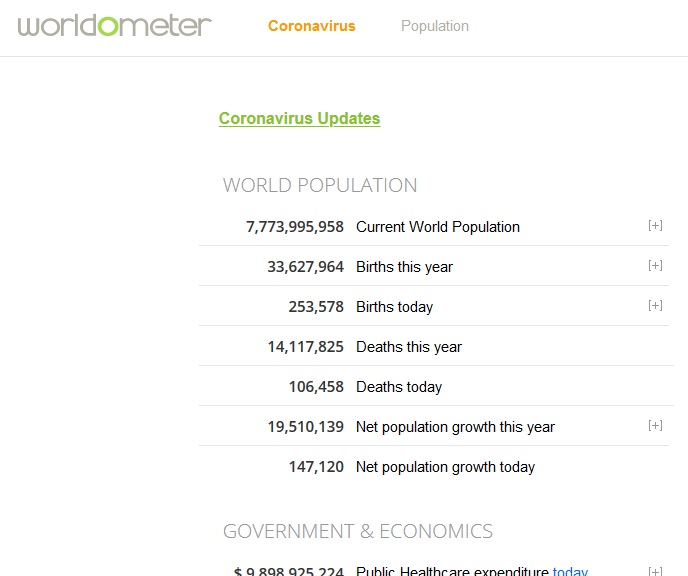 https://www.worldometers.info/ The WORLDOMETER has taken over the “BODY COUNT REPORT” business and officially killed Sully and Slim Johnson and Anti-Social News!… 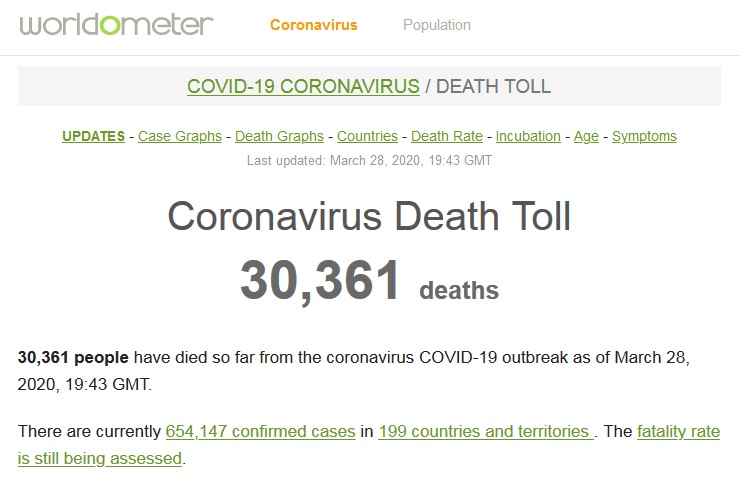 While on the subject of COVID19, just throwing this out there, DON’T be stupid and give personal information to websites claiming to have corona virus screening questionnaires that AREN’T “.gov” website.  Only trust CDC.gov or your local state government’s website to check you for the disease- also, I personal took the CDC self-checker and it NEVER ASKED for personal information, only symptom details!  I went to CDC.gov clicked on COVID 19, click on the “If you’re sick” button. 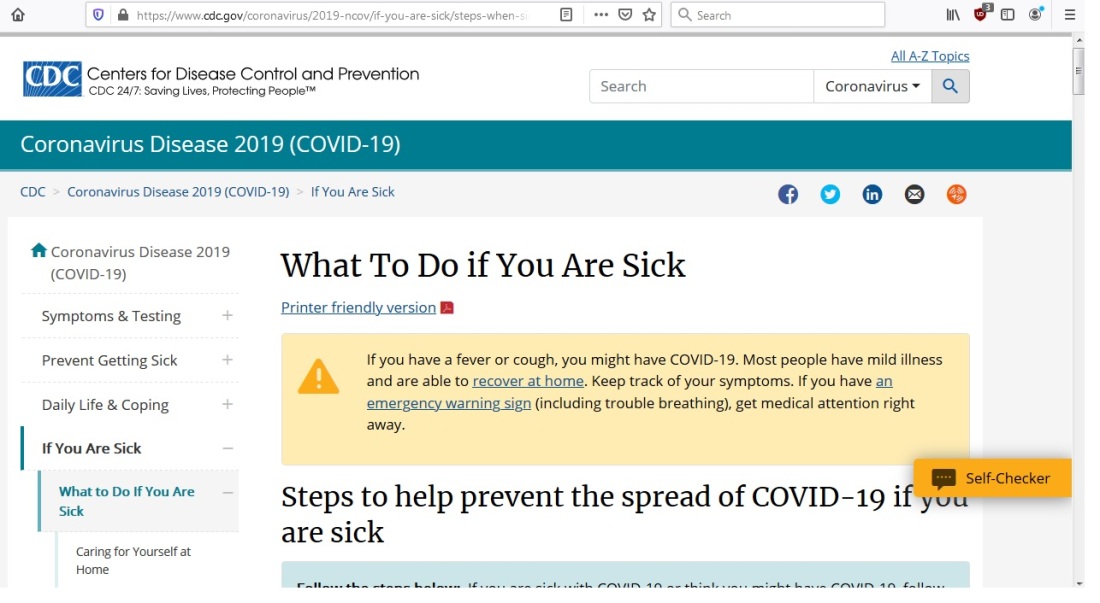 Then I clicked the yellow “Self-Checker” tab in the bottom right corner.

and opened a chat window where it asked me simple questions.

What’s going on in the Caribbean?! All the news in the US has been about what’s going on in DC or El Paso and we’re not talking about anything else but Haiti is in full blown crisis mode, it’s looking like the riots in the 90s people are dying!

If it’s wrong to convince someone to kill their self, encourage kids to do dangerous stunt they see on TV or leave a pool in a back yard unfenced, why is it okay to ENCOURAGE poor people to illegally immigrate into the country dangerously?

More than 260 migrants died trying to cross the US southern border: Report https://abcnews.go.com/International/260-migrants-died-cross-us-southern-border-report/story?id=59832675&fbclid=IwAR256W45CJEsuIKx3f5yAdDT0DTBKlsX_VJnwUKVUMTh19nz7VgKcJo07XU

Compare number of deaths to School Shootings:
2018 was by far the worst year on record for gun violence in schools https://www.vox.com/2018/12/10/18134232/gun-violence-schools-mass-shootings

Keeping in mind NO organization recognized by the federal government promotes school shootings, but there are several who advocate for dangerous illegal crossing of the southern border. Here is one of the groups, Pueblos Sin Fontera:

“I’m Omid,” YouTuber Nazif Touran has partnered with the Anti-Social News YouTube channel and is helping out with some jump cuts. Check out his handy work on the most recent ASN youtube video:

Didn’t mean to rant for as long as I did, but that’s an awesome 1st run.  What do you think, how did Nazif do?!  Should he be granted the position of Anti-Social News editor and get the Patreon?!
Please help make this job worth his time by supporting the YT Editor Patreon:
https://www.patreon.com/antisocialnewsYT
Even if he doesn’t want to do the daily upload bullshit and quits, please sub to his channel!
https://www.youtube.com/user/cards162 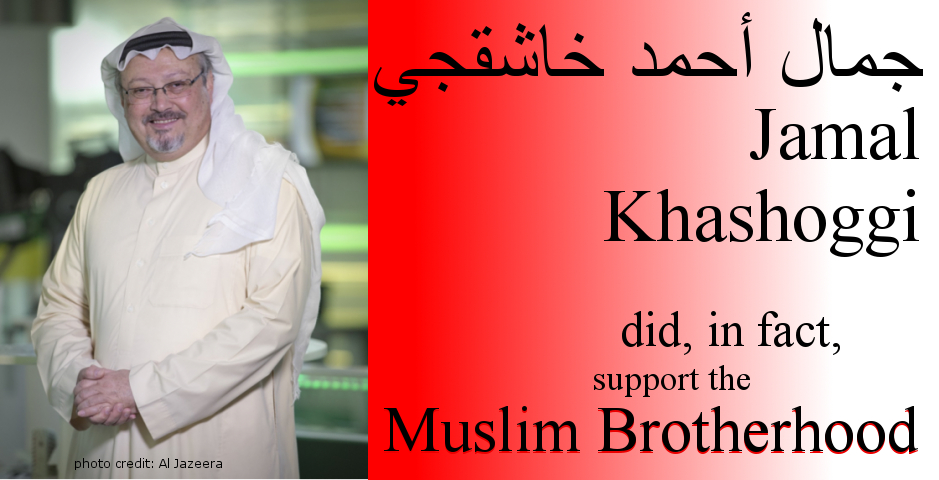 Jamaal Khashoggi, an activist and op-ed writer for the Washington Post, was murdered by professionals while in a Saudi Arabian embassy in Turkey. Information on this:
Khashoggi’s body was ‘dissolved’, says Erdogan adviser
https://www.irishtimes.com/news/world/europe/khashoggi-s-body-was-dissolved-says-erdogan-adviser-1.3684300?mode=sample&auth-failed=1&pw-origin=https%3A%2F%2Fwww.irishtimes.com%2Fnews%2Fworld%2Feurope%2Fkhashoggi-s-body-was-dissolved-says-erdogan-adviser-1.3684300

I put all this together, because I want the truth NEVER to become “untrue” or “a smear” just because of politics. The following DOES NOT make any excuses for the murder of Jamal Kashoggi, merely confronts any revisionist history that might be taking place on his behalf or on behalf of his former associates, the Muslim Brotherhood.
The first article I found when searching was a mental gymnastics piece by someone at Brookings, basically saying “Yes, but…” to my point.
https://www.brookings.edu/blog/order-from-chaos/2018/10/19/on-jamal-khashoggi-the-muslim-brotherhood-and-saudi-arabia/
A very biased article that proves he was part of Muslim Brotherhood but doesn’t want people to bring it up.
“Yes, Jamal Khashoggi had many friends among the Muslim Brotherhood and, as his colleague David Ignatius reported days after his disappearance, had joined the movement himself as a young man…” The article continues to attempt to smear anyone pointing out his factual connection to terrorist supporters and other right wing Muslim groups as being right-wingers themselves… because…. um…. Brookings logic!So I did a google search for up till before Jamal’s murder and instantly found a recent article of his praising the Mulsim Brotherhood and lamenting their loss of supreme authority in Egypt.

“The U.S. is wrong about the Muslim Brotherhood — and the Arab world is suffering for it”
https://www.washingtonpost.com/news/global-opinions/wp/2018/08/28/the-u-s-is-wrong-about-the-muslim-brotherhood-and-the-arab-world-is-suffering-for-it/?utm_term=.b54b3e4b5532
This is an Op-ed piece in support of Muslim Brotherhood, a right wing, anti-Christian, anti-women’s rights and anti-Israel organization in Egypt.

Since the coup by Al-Sisi, MB has pretended to be the underdog again, but we have to ignore their majority backed violence and hate to let them get away with that.

For some background on what he was defending:
The US and UK supported the right-wing mob, the Muslim Brotherhood to organize riots and mob rule in 2011 in Egypt to oust Hosni Mubarak. Despite their burning of Churches and raping of women, the US sided with the Muslim Brotherhood and defended them durring the “democratic” process. Mohammed Morsi, the MB’s presidential candidate was later overthrown after attempting to become a Supreme Leader* akin to the Ayatollah in Iran. Of course a right winger declaring himself a supreme leader is as illiberal as it gets, but that’s not how the left in the US were sold the situation by people like Khashoggi.

MB’s overt treatment of Women:

No #metoo movement for those women! They were assault by “the good guys” the Muslim brotherhood organized mob, so it was A-Okay!

The “Democracy” that Kashoggi lament being overthrown:
“With parts of his capital ablaze, Mubarak said he was asking his government to resign and would soon announce a new one, pledging to address the concerns of thousand of Egyptians protesting in Cairo’s streets.” – CNN “Obama: I told Mubarak he must deliver on his promises” (http://www.cnn.com/2011/WORLD/africa/01/28/egypt.protests.u.s..response/index.html)

Why he is a Martyr (rant against media fearmongering)

Jamaal’s murder was disgusting and a gross abuse of power, no matter who ordered the killing.  I am frustrated by reading or hearing the details but one of my biggest aggravations with this subject is that I have been talking about the bloody conflicts that the Saudis have been involved with for years and now, while US mainstream media completely IGNORED them. I’m bothered that the only reason they pay attention to this story and finally condemn some of the behavior of the Saudi royalty, is because they, personally, feel attacked.  Khashoghji wasn’t a Muslim Brotherhood member to CNN or Washington Post, he’s not even a muslim to them- he’s a Journalist, and because of that, he’s one of them and an attack on one is an attack on all! They COMPLETELY ignored any of the things he stood for or that he wanted to fix and completely made the story about themselves, fearmongering that media was all being targeted for violence and continuing the mental gymnastics to tie the situation to US President Donald Trump.  It’s embarrassing.  So, if you want to see him as a Martyr, do so for the right reason. Look to Yemen, look to human rights violations in peninsula, scrutinize leadership and ask questions, don’t just play the victim, find the victims and report about the them!  Be journalists!
https://www.independent.co.uk/news/world/middle-east/khashoggi-murder-news-saudi-arabia-turkey-investigation-istanbul-consulate-latest-a8609141.html

The Uyghur people of China are disappearing, are they being quietly relocated, or worse?

See what BBC found out:

This story is more troubling than the Rohingya situation in that it effects many more people, a minority in Myanmar that capture the worlds attention by fleeing the Burmese territories due to pressure in the past years after Rohingya terror attacks.  The Uyghur situation is different in that they are a much larger population, apx 10 times as large, but a much smaller minority within China, a much more powerful country.

Basically, my point is, if you gave a shit about Myanmar, you should be livid about China. If you don’t, you are a bully who wants to pick on an easy target, third world country and China is what, too big to criticize? Anyway, this some scary stuff and the world should be alert.  US can’t sneeze without people making an international fuss, Israel can’t cough without a UN Human Rights inquiry but China can get away with ANYTHING.

Intro to the news:

YEMEN FROM AJ: https://www.aljazeera.com/topics/country/yemen.html
YEMEN FROM RT:
https://www.rt.com/tags/yemen/
NOTE THE DIFFERENCE IN REAL TIME REPORTING OF “THE SAME” EVENTS 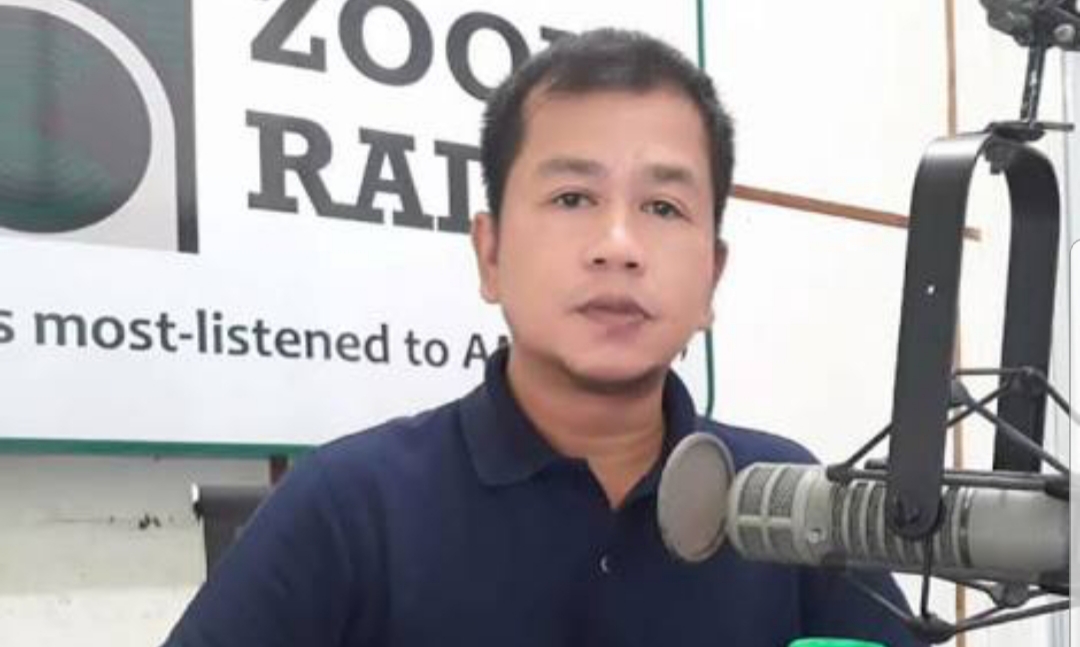 According to the National Union of Journalists of the Philippines, Joey Llana, a blocktimer of radio station dwZR in Legazpi City, was killed as he was leaving his home in Brgy. Penafrancia, Daraga at around 4 a.m.

The victim was on his way to host his program, Metrobanat, when he was ambushed.